How the Great Ocean Road was built

The Great Ocean Road runs along one of Australia’s most stunning stretches of coastline. The coastline isn’t the only impressive thing though, in fact, the road itself is quite the feat of engineering.

History of the road

Many people do not realise that the Great Ocean Road is a permanent memorial to those who died during the First World War. The road was built over decades by returned servicemen and acted not only as a memorial but as a much-needed access road to Lorne and the surrounding coastal communities.

Before the road was built, the towns along the coast were incredibly isolated and it was a treacherous journey from Geelong. Coaches navigated rough tracks and dense bush to provide access to the outside world.

Post-WWI, the chairman of the Country Roads Board contacted the State War Council with a proposition. He proposed the council provided the funds to build the road as a way to provide repatriation and reemployment of returned soldiers.

Following this suggestion, the mayor of Geelong set to work raising the money required to fund this project. It was his idea to make the road a memorial to those who had died and not just an employment opportunity for returned soldiers.

He also saw the road as a commercial tourism opportunity. He claimed that the coastlines ocean, mountain, river and fern gully views would make it more attractive than even than French Riviera. We’re inclined to agree with him! 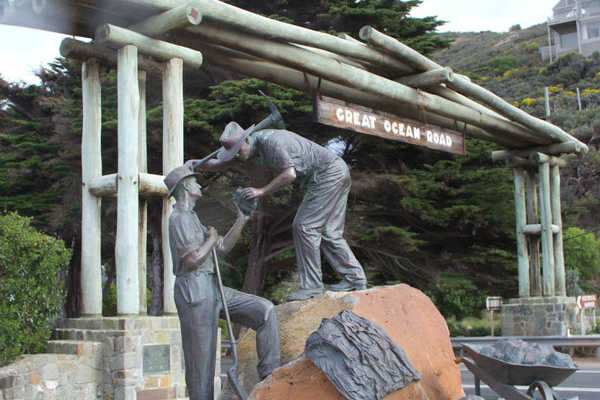 Work finally began on the road in 1918, and thousands of soldiers flocked to the area. It was not easy work for the soldiers, with no machinery to help them progress was slow and tedious. Horse and carts were used to move materials, while shovels and picks were used to tear up the ground for the road to be laid.

The first stretch of road, between Lorne and Eastern View, was completed in 1922. Over the next decade the road was gradually completed until in November 1932 it was finally opened.

The day the road opened, a procession of 40 cars travelled the road and schoolchildren lined the route to wave at them. For the first four years of operation, drivers were required to pay a toll at Eastern View, where the memorial arch is now standing. This was abolished in 1936 when the Great Ocean Road Trust gifted the road to the State Government.

As you can see, the Great Ocean Road has quite an interesting history and is more than just a stretch of asphalt.

The Great Ocean Road is a beautiful stretch of coastline that you absolutely must visit. Our friendly tour guides will teach you about the road when you stop at Memorial Arch. And they’ll tell you the famous stories of the Shipwreck Coast as you continue towards Lorne.

As you stand above the 12 Apostles, breathe in the air and remember the countless hours of hard work put into creating the road you have travelled. The Great Ocean Road should not be missed, so book your tour with us today!

Related article: Romance your Valentine on the Great Ocean Road