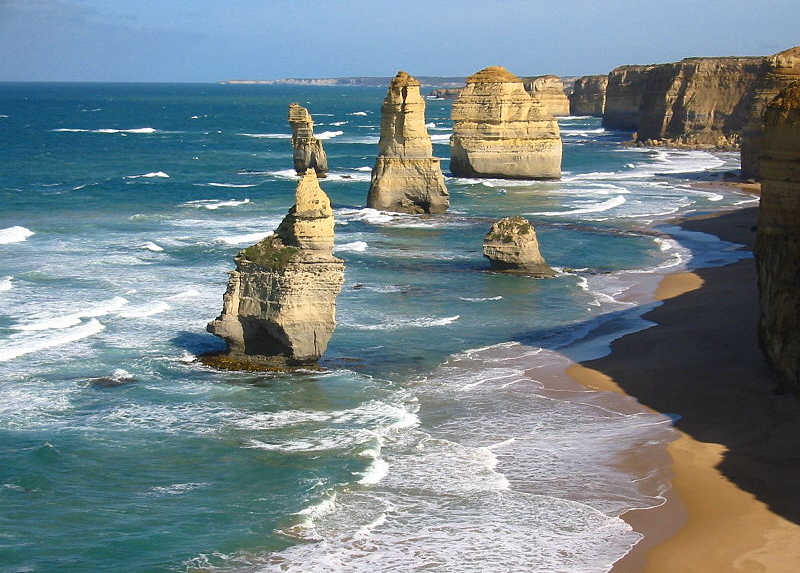 The Great Ocean Road is one of the biggest tourist attractions in Australia, promising stunning coastlines and rugged scenery for miles and miles. Along the route, there are plenty of incredible natural landmarks, of which the 12 Apostles is probably the most famous.

These majestic rock stacks seem to emerge from the Southern Ocean, providing a unique silhouette to the dramatic coastline of Victoria. The attraction is set in the Port Campbell National Park, these huge limestone structures soar 45 metres above the ocean and are backed by rugged cliffs that span back thousands of years.

How the 12 Apostles Were Formed

The 12 Apostles have been formed by natural elements over millions of years. The constant erosion began around 10-20 million years ago, when the strong waves of the ocean combined with blasts of wind gradually began to wear away the softer limestone in the region. Over time, this formed a series of caves in the cliffs which then eventually became arches. After that, they eroded further, leaving the impressive stacks isolated from the shore.

The Best Time to Visit the 12 Apostles

To avoid the crowds, visit the 12 Apostles at sunrise or sunset. During these hours, less people stand in the way of the view, plus you get to see the limestone stacks at their finest. They change from a dark and mysterious to a brilliantly bright yellow when the sun has fully rises, and change in reverse when darkness falls.

How to Get to the 12 Apostles

The 12 Apostles are set around 275 kilometres to the west of Melbourne, which equates to a four-hour drive along the lush and bountiful length of the Great Ocean Road. As you go, you’ll get to spot other major landmarks that have been carved by the elements and time.

While on-site, be sure to visit the 12 Apostles Centre, where you can learn more about the fascinating cultural heritage of the attraction and the many stories that still imbue it today. From there, you can take a picturesque walk to the coastline that hugs the 12 Apostles. It takes you through a tunnel to a series of breath-taking lookout points, where you can soak up the stunning scenery for miles in every direction.

The 12 Apostles are a must-visit if you’re exploring this part of Australia. Their stunning beauty, magnificent history, and rich cultural heritage make them an enticing and exciting attraction on the Great Ocean Road.