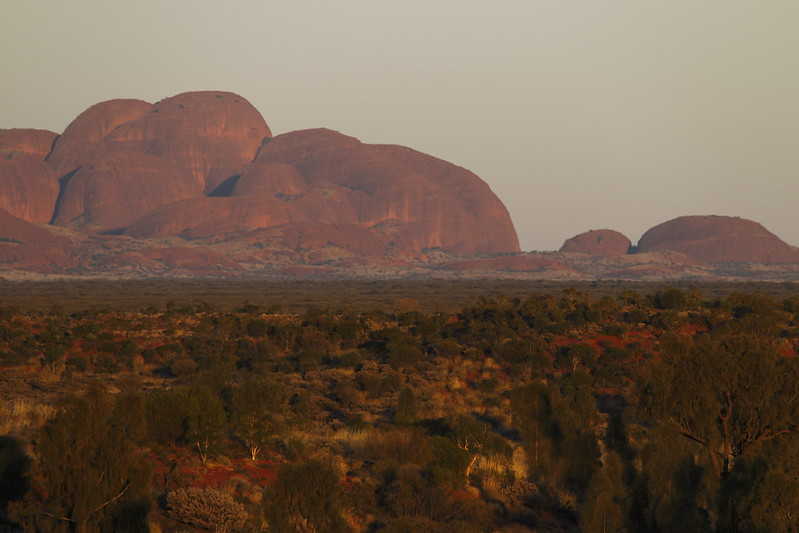 No trip to the Northern Territory is complete without a stop at Kata Tjuta in Uluru-Kata Tjuta National Park.

They might not be as internationally recognised as their neighbour, Uluru, but Kata Tjuta is no less fantastic.

Nestled in the heart of Anangu land, Kata Tjuta is a collection of large rock formations spanning over 21 square kilometres. Thirty-six domes make the formation, with the peak, Mount Olga, reaching elevations over 1,000m.

Believed to have formed over 500 million years ago, the domes were first seen by the Anangu people, who have inhabited the land they sit on for more than 22,000 years. There are many traditional stories relating to the formation of Kata Tjuta. One details the life of the great snake king Wanambi. It is said he lived atop Mount Olga and only came down during the dry season.

The name Kata Tjuta means ‘many heads’ in the local Pitjantjatjara language and refers to the rounded shape of each formation. The site is a sacred place for men’s business, and much of the cultural knowledge and legends are kept from public knowledge. Though sacred, the Anangu people welcome you to explore the various walking tracks around and through the formations. When walking, keep an eye out for wildlife as the main gorge is a sanctuary for native animals and plants.

Before journeying through Kata Tjuta, head to the Uluru-Kata Tjuta Cultural Centre. Learn about the significance of the land and the spirituality of the walks on offer. Take this understanding with you when you venture into the formations, your deeper understanding will make your experience even more special. Walk quietly, respect the land and do not swim in water holes you may find.

There are several walks of varying difficulty and length for you to choose from. The popular Walpa Gorge Walk will take you to a desert refuge for flora and fauna. During the winter you may see small fields of pink daisies and wallabies. If you’re a keen hiker looking for a day long walk, try the Valley of the Winds trail. The spectacular views are well worth the effort and you’ll be led to several lookouts with unbelievable views. As Kata Tjuta is sacred the Anangu people request that all photos include both edges of the gorge, and that you refrain from posting to social media to avoid accidentally publishing sacred sites. According to Anangu culture the rock formations hold knowledge that should only be learned in person on location by those with the cultural authority to do so.

After a day of walking amongst Kata Tjuta, take in the sight of the ochre-coloured shapes at sunset. Kata Tjuta glows as the bright Australian sun splashes over its many peaks. In similar form to Uluru, the domes colour appears to change at dawn and dusk. Watching this fantastic visual illusion is the perfect way to finish what is sure to have been an incredible day of adventure and spirituality.

Kata Tjuta is an astonishing formation that should not be missed. Experiencing this feat of nature and developing an understanding of the spirituality of Kata Tjuta is truly unforgettable.